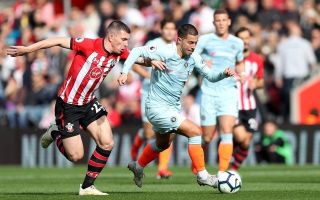 Sarri faced off with a familiar face in Saints striker Manolo Gabbiadini who played under the at Napoli prior to his move to the Premier league.

Danny Ings had the best chance of the entire first-half in the 26th minute of the clash.

Ings was left completely unmarked in the middle of the box but his side-foot volley soared over the crossbar. Ings who made the switch to Southampton this summer should have capitalised on the chance to score an open goal.

Even the Chelsea Twitter admin couldn’t believe the Blues luck:

Not sure how we've escaped there… ?

Danny Ings misses an open goal from only a few yards out. It remains goalless.

Former Liverpool striker Danny Ings was certainly made to rue his glorious chance for the Saints.

Chelsea’s main man Eden Hazard opened the scoring only 4 minutes later, one-time Chelsea ‘misfit’ Ross Barkley recovered the ball for the Blues before playing in the Belgian who never looked like he was going to miss.

See More: Video: Eden Hazard opens to scoring for Chelsea against Southampton after some great work by ‘misfit’ Ross Barkley

Hate to admit it but Azpilicueta is now bang average.

Azpilicueta has been poor, he's been sub-par all season. The alternative is Zappacosta, though. Better off persevering and hope he grows into the role.

why exactly has Azpilicueta seemingly dropped off this year?

Azpilicueta is finished and should be replaced in January. Meunier needed.

Azpilicueta was the best one on one defender in the league but now average players run past him like joke and he can’t contribute to our attack. Worrying with of due respect to the captain but we need to replace him.

I knew a day would come when Azpilicueta will be poor, just didn't want it now.

Just like prime Ivanovic ending up as trash
This is sad.

Azpilicueta evolved quickly from our most consistent player to the worst player in the squad, can't pass forward and can't cross zilch plus in this match Redmond and Bertrand are having him for lunch.

shame Azpilicueta has struggled so much this season… makes me sad

Maurizio Sarri’s men have looked very impressive so far this season and the Italian is forcing his side into title contention with Manchester City and Liverpool.