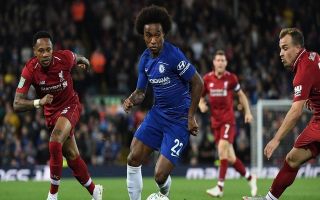 Liverpool ace Nathaniel Clyne has been linked with a shock switch to Leicester City. Clyne missed the majority of last season with a back problem.

According to a report by The Sun, Leicester are interested in making a move for Clyne in the January transfer window as they look to bolster their ranks at right-back.

Clyne is still on the path to fully recovering from his injury troubles and Clyne has only made a single appearance for the Reds this season – coming in the 2-1 defeat to Chelsea in the Carabao Cup.

Leicester are keen on adding another option at right-back to provide competition to summer signing Ricardo Pereira who scored in Leicester’s 2-1 defeat to Everton this weekend. Danny Simpson has fallen out of favour with the foxes so the prospect of singing Clyne is an attractive one.

A move to Leicester – who play an attacking brand of football, would be ideal for 27-year-old Clyne who has fallen down the pecking order at Anfield.

Jurgen Klopp now favours Trent Alexander-Arnold as his first-choice right-back and Klopp has often deployed Joe Gomez at right-back ahead of Clyne in recent times.

Clyne is presented with the rare opportunity to get his career back on track with a fellow Premier League side, Clyne will need to be playing at the highest level if he has any hopes of earning an England recall in the future.