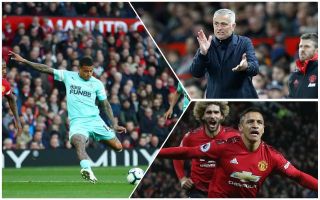 Manchester United conceded two goals in the opening ten minutes of a Premier League game at Old Trafford for the first time yesterday.

The Red Devils were stunned early on as goals from Kenedy and Yoshinori Muto gave Newcastle a 2-0 lead to start what looked like being another miserable day at the office for Jose Mourinho.

However, three goals in the final twenty minutes turned things around for United, with Juan Mata, Anthony Martial and Alexis Sanchez scoring to spare Mourinho’s blushes.

Opta claim this nightmare start set an unwanted record for United, who have been hugely dominant in the Premier League since its inception in the 1992/93 season.

2 – Manchester United have conceded two goals in the opening 10 minutes of a Premier League game at Old Trafford for the very first time. Lapse. #MUNNEW pic.twitter.com/MYfwePAnGN

However, since the retirement of Sir Alex Ferguson in 2013, things have not gone nearly as smoothly for them, with the club enduring a difficult start to this season.

Even the win over Newcastle does little to change that, with some far tougher fixtures coming up in the next few weeks.

United’s shaky and nervy defending at the start of this match to set an unwanted piece of history for the team simply shows how vulnerable they are right now, even if they also showed great character to fight back late on.