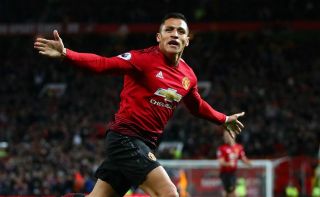 The Red Devils got off to a nightmare start – conceding twice in the opening ten minutes of a home game for the first time in the Premier League era.

However, goals from Juan Mata and Anthony Martial set up an exciting finish as Sanchez then headed in the winning goal in stoppage time to hand United their first win in five games.

The Chile international has largely disappointed since joining from Arsenal in January, with his goal against the Magpies only his fourth for the club since he joined, and his first this season.

The 29-year-old looked visibly thrilled to have finally got on the score-sheet this term with such an important goal, and he was unsurprisingly praised by his team-mates and his manager afterwards.

On Sanchez’s goal, Mourinho said, as quoted by the Daily Star: ‘I think he is a good boy. A good professional who works really hard.

‘Today, I think it’s an amazing feeling for him to score the winning goal in a comeback. That is nice.’

‘I think he’s one of the most hard-working professionals I have ever seen and to give us the win, he deserves it and I am really happy for him,’ Lukaku is also quoted in the Star.

Shaw is also quoted in the piece as saying this could be a big moment for the ex-Gunners star, saying: ‘It’s massive. As football players, confidence is something you need when you step onto the pitch.

‘You need to believe in yourself, you need to have that confidence to do things and we know how much of a special player he is and today could have been a massive confidence boost.’