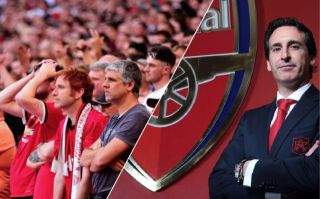 Manchester United fans have taken to social media to vent their jealousy of the fact Arsenal have Unai Emery as their manager following the Gunners’ 5-1 drubbing of Fulham.

The north London side have now won their last nine games in a row in all competitions, and currently sit third in the league having lost their two opening games of the campaign.

The same cannot be said for Man United, who have already lost three times in the league so far this year, as well as being knocked out of the League Cup by Championship side Derby County.

This may be one of the reasons as to why some of United’s fans seem to be jealous of Arsenal’s choice of manager in Emery, who took charge of the club this summer, replacing Arsene Wenger in the process.

We can see why these fans might be envious, as United’s style of play under Mourinho is far less exciting and, seemingly rewarding, than Arsenal’s under Spaniard Emery.

Here are a few tweets from United supporters seemingly expressing their jealousy of the fact that Emery is in charge of the Gunners, and not the Red Devils.

Emery took over the worst team in the top 6 and after two months they're on a longer winning streak than we've ever had under Mourinho pic.twitter.com/tOmpBk3XKj

We need an attacking manager asap. Look what Emery’s doing with fucking Iwobi and Mkhi, while we have Martial and Alexis struggling to take a man on ffs

@ManUtd got it wrong replacing Fergie with Moyes.

See what Emery is doing in Arsenal as Wenger replacement.

How I wish United never listened to Fergie.

United seemingly have a better squad than Arsenal. But they have got a manager who brings the best out of their attacking players. I am sure Emery would do a better job at United than Mourinho

Arsenal have more defined and successful attack after two months of Emery, than United after more than two years with The Deluded One