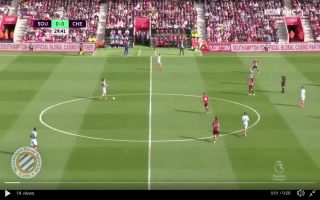 One-time ‘misfit’ Ross Barkley continued his resurgence at Chelsea by recovering the ball for the Blues before slipping in Hazard who kept a cool head to fire the title contenders into the lead.

The goal was Hazard’s seventh of the season and the Belgian wizard looks nailed on to win his second Premier League Player of the Season award.

Check out Hazard’s opener below:

Maurizio Sarri has worked wonders with Chelsea so far this season and the Blues’ chances of lifting the Premier League title at the end of the season are looking more likely than fans would have ever imagined.