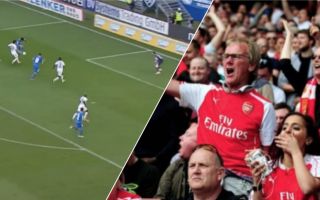 Reiss Nelson scored his second goal of the season for Bundesliga outfit Hoffenheim this afternoon, a strike that had a few Arsenal fans over the moon.

The 18-year-old, who is on loan to Hoffenheim from the Gunners, scored a superb right-footed half volley late in the second half for the German side.

MORE: (Photo) Some Arsenal fans loved this classy moment from ‘leader’ who didn’t even get on the pitch vs Fulham

This goal seems to have only made Arsenal fans’ day better, as not only did Unai Emery’s side thump Fulham 5-1 at Craven Cottage, one of the club’s brightest prospects also got his name on the scoresheet.

Here’s a clip of Nelson’s strike, and the Arsenal fans’ overjoyed reaction to it.

Another goal for reiss Nelson, guy will be top top quality.

Another goal for Reiss Nelson. My boy prospering in Germany pic.twitter.com/9REhAC3yyF

Reiss Nelson scores another for Hoffenheim. What a day this is.