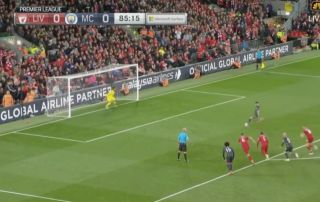 Riyad Mahrez had a moment to forget for Man City this evening, as he bottled the chance to win the game for the Citizens away to Liverpool from the spot.

The Algerian skied his penalty well over the bar with just minutes of normal time remaining, a goal that could very well have ended up seeing the away side take home all 3 points.

City won the penalty thanks to Leroy Sane, who was fouled in the area by Virgil Van Dijk, and we’re sure the Reds star will be over the moon to see Mahrez sky his penalty this evening given that it was him who gave it away.

Here’s a clip of Mahrez’s awful spot-kick. He must’ve thought he was playing Rugby!