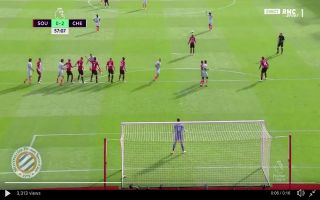 Premier League title contenders Chelsea looked in full flow at the beginning of the second half of their match against  Southampton at Saint Mary’s.

Today’s match-up will be a day to remember for one-time Chelsea misfit Ross Barkley, the 24-year-old turned in a performance which will excite fans who have been eagerly waiting for the attacking midfielder to reach his potential.

From a Willian free-kick in the 57th minute, Frenchman Olivier Giroud produced a magnificent acrobatic assist leaving Barkley free to to poke the ball into the back of the net.

Barkley has seemed to rejuvenate his career since Maurizio Sarri took the reigns at Chelsea, Barkley was recalled into Gareth Southgate’s England squad on Thursday. It is is great to see such a talented player getting back to his best.

Check out the video of Barkley’s goal below:

Barkley with his 1st goal for Chelsea. The first of many to come. pic.twitter.com/pgATkjBtcu

Maurizio Sarri could shock the world by winning the Premier League title with Chelsea in his first season in charge given Chelsea’s impressive start to the season.