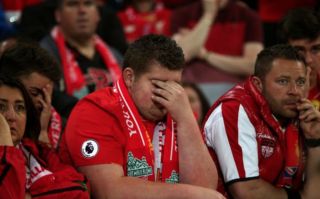 Liverpool fans took to social media this evening to slate the performance of Jordan Henderson as the Reds were held at home by rivals Manchester City.

The game was one that contained few chances, with the best falling to Riyad Mahrez from the spot just minutes from time, however the Algerian wasn’t able to convert as the game ended 0-0.

The game was very even from start to finish, however Man City probably just edged it slightly in being the team who looked more likely to bag a winner.

One Liverpool star who fans singled out as having a less-than-good game was that of midfielder Jordan Henderson.

The England international did tend to lose the ball a number of times during the match, and his presence could’ve easily been replaced by a number of players the Reds have at their disposal.

Due to the player’s performance, a number of Reds fans took to Twitter to slate the midfielder’s display this evening, with some even calling for the Englishman to be sold.

Here’s a few select tweets from supporters regarding Henderson.

We think they’re being a bit harsh in all honesty…

Henderson is the last man in midfield and he fully presses the ball and dont give a fuck about the space behind him, wish he was sold to Fulham.

Look at this for absolute abomination of a comment. Henderson was awful. Had no control on the game. Passing was awful, touch was awful and he has zero creativity. Journalism at its finest???
If Liverpool are to have any say in the league Henderson can't be on the pitch #LFC https://t.co/9DoagA8llr

Henderson was awful today. Always standing too close to people and playing hospital passes. Just got in everyone’s way he was a spectator. Lovren, on the other hand, was very good if you ignore his jazz hands

Henderson doesn't even fit in the bracket of average players.
What an awful captain. Yuck

Jordan Henderson is awful isn't he.