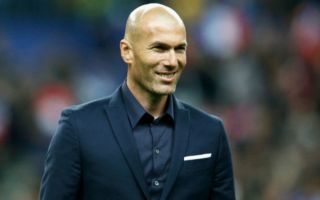 The Frenchman has been strongly linked as a possible replacement for Jose Mourinho amid United’s current struggles, with the latest from the Daily Mirror being that the club have placed him on standby.

MORE: Jose Mourinho reveals the message Manchester United board sent him before the Newcastle game

Some fans seem impatient to see Zidane take over, with some even posing with a 2D version of the ex-Madrid boss before the Newcastle game.

In the end, United beat the Magpies 3-2 in a thrilling comeback at the Theatre of Dreams, so Mourinho may have bought himself a little more time.

Still, the message from these fans seems pretty clear…

A fan poses with a life-size cutout of the former Real Madrid manager #MUFC pic.twitter.com/Sqx4pylE5g

Zidane was a huge success in his previous job with Real Madrid, winning the Champions League three times in less than three full seasons in charge.

This is pretty remarkable for the 46-year-old in what was his first job at senior level in football.

Still, it is debatable if he could be quite as successful at a club like United, which seems a more challenging job at this moment in time.

Indeed, one report in the Daily Mirror suggests this is one key reason – along with the cost of sacking Jose Mourinho – that is preventing the Red Devils from making a change right now despite the team’s poor form.