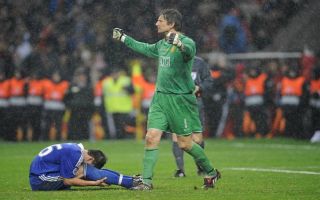 Ex-Chelsea defender John Terry announced his retirement from football on Sunday, which was met by a wave of insults from Manchester United fans.

The former England centre-back enjoyed a glittering, trophy-laden career with the Blues and became one of the best players in the country, however, there is one moment that he will surely always look back on with regret.

During the 2008 Champions League final, which saw Chelsea face off against Man United at the Luzhniki Stadium in Moscow, Terry slipped to miss a spot-kick in a penalty shootout, which proved to be decisive as the Red Devils went on to lift the trophy.

The 37-year-old called time on his playing career at the weekend and he has rightly been showered with praise and adulation for his achievements over the last two decades, but some supporters will not let him forget that moment on the biggest stage of them all, as you can see below.

That night in Moscow?? pic.twitter.com/4RlatJIuvV

Being branded a ‘Manchester United legend’ might sting for Terry even ten years on from that fateful night in Moscow, but it is a great testament to his character that he didn’t let that setback derail his career.

The famous Blues captain went on to win the European Cup with Chelsea in 2012 and added plenty more silverware to his collection during the latter stages of his spell at Stamford Bridge.

However, Terry has always been a divisive character off the pitch, inviting criticism with his arrogant streak and penchant for controversy, which is why Man United fans will continue to troll him in the coming days and beyond, even as he tries to enjoy his retirement.

Check out a few more Tweets below:

Thank you John Terry for your service.. and from a @ManUtd supporter, Thank you for that big penalty miss during the final when we won the UEFA..

A man united legend thank you terry for missing on that rainy day in Moscow 2008 thank you sir ?? https://t.co/gLKwgGg1E7

feels like @ManUtd should do something to honour john terry’s retirement. the man won us more european cups than robson, cantona and van nistelrooy combined.

Thanks for the penalty miss in 2008? but seriously, enjoy your retirement John Terry, one of the very best CB in premier league history.