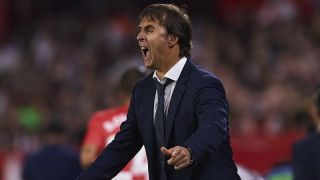 In a somewhat predictable turn of events, Real Madrid boss Julen Lopetegui has faced reports of his job being under threat after further disappointment over the weekend.

After seeing Zinedine Zidane stand down at the end of last season coupled with the departure of Cristiano Ronaldo and the heady expectations given their success in recent years, the pressure was undoubtedly on Lopetegui to deliver immediately.

While his side made a decent start to the campaign, they’ve now gone four games without a win in all competitions, losing to Sevilla, CSKA Moscow and Alaves while being held to a draw by city rivals Atletico Madrid.

That in turn has piled the pressure on the Spanish tactician and his squad, with Madrid currently in fourth place in the La Liga table after eight games, albeit they remain only two points off top spot.

According to Mundo Deportivo though, a crunch meeting was scheduled for Monday afternoon for the Real Madrid hierarchy to make a decision on their coach, and given that touted timeline has passed without an announcement, it appears as though they have opted not to sack him already.

Given the changes over the summer as well as injury troubles that Lopetegui has faced so far this season, it’s arguably fair that he gets a little more time to turn things around and prove he’s up for the job at the Bernabeu.

However, while the international break offers some respite now, he will have to ensure his side deliver positive results thereafter, otherwise it might not be long before more key meetings are being reported with his job continuing to be on the line as much more is expected of the reigning European champions if they are to win trophies this season.