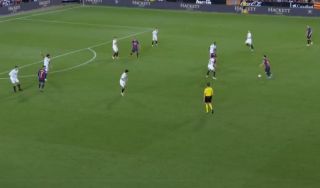 Lionel Messi worked his magic again last night for Barcelona as they stole a point against Valencia in their La Liga clash at the Mestalla.

The Catalan giants went behind early on but Messi drew them level in the 23rd minute with a stunning piece of work that was almost entirely of his own making.

Watch the video below as Messi receives the ball with as many as eight Valencia players blocking his path to goal.

MORE: Chelsea transfer target to be sold for around £88m after being benched for Valencia vs Barcelona match

The Argentine then nutmegs an opponent to get the ball to Luis Suarez, who returns it to him for an inch-perfect shot from outside the box right into the corner.

Only Messi can demolish two blocks of four like this with such ease…the man truly is on another level!