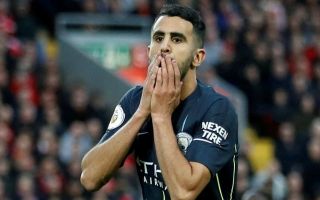 The Algerian winger, City’s summer signing from Leicester, ended up skying his effort and costing his team the chance of snatching a late victory at Anfield.

Guardiola’s side faced Liverpool in what could have been a chance to gain some valuable breathing space in this season’s title race, with the Reds looking like serious contenders under Jurgen Klopp this year.

Still, the game finished 0-0 and Guardiola accepted a large portion of the blame for preventing Jesus, the club’s usual penalty taker, from taking the spot-kick instead.

The Spanish tactician hinted, however, that Mahrez could continue to take penalty kicks as he was quoted by the Independent as saying he was confident the player would score next time.

‘During the training sessions every day I see Mahrez taking the penalties and it gave me a lot of confidence,’ Guardiola said.

‘It will be good experience for him, next time it will go in.’

On Jesus, he added that he’d apologised, saying: ‘Yes, of course. It was my decision.’

City were well beaten in two games at Anfield last season, losing 4-3 in the Premier League and 3-0 in the Champions League, so will perhaps see a 0-0 yesterday as some progress.

However, they’ll also be well aware they had a real chance to take three points and that their big-name summer signing seemed to majorly lose all composure at the crucial moment.