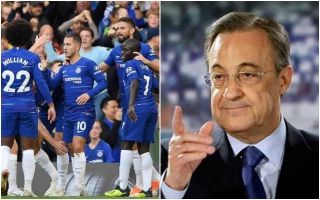 Los Blancos have made a poor start under new manager Julen Lopetegui as they embark on a new era this season after losing former manager Zinedine Zidane and legendary goalscorer Cristiano Ronaldo in the summer.

MORE: Chelsea transfer target to be sold for around £88m after being benched for Valencia vs Barcelona match

Madrid are seemingly paying the price for this as they’ve just gone four games in a row without scoring a single goal, so it’s clear some more work in the transfer market is needed after a quiet summer by their standards.

According to Don Balon, Perez is prepared to pay as much as €250m to sign both Chelsea forward Eden Hazard and Inter Milan striker Mauro Icardi in January.

This would be a major show of ambition from the Spanish giants – and in truth much more like the Real Madrid we used to know as Perez has so often spent big on ‘Galactico’ signings during his reign as president.

Given the way Gareth Bale, Karim Benzema and Marco Asensio have struggled since Ronaldo’s exit – while summer signing Mariano looks slow to settle as well – it seems vital that Real can land both Hazard and Icardi to bring that all-star look to the team’s front three once more.

Hazard has lit up the Premier League with Chelsea this season, somehow managing to take his game up yet another level under the Blues’ new manager Maurizio Sarri.

The only player to be involved in 10+ Premier League goals so far this season?

The Belgium international is the only Premier League player to be involved in ten or more goals so far this season, and is precisely the kind of skilful and confident superstar in the Ronaldo mould that Madrid need.

The 27-year-old can operate wide on the left, behind the main striker or as a false 9, so seems the perfect player to slot in to a number of roles in Lopetegui’s side.

On top of that, Icardi has been a hugely prolific player in Serie A and has long been linked with moves to bigger clubs.

Don Balon state he’s a €100m target for Perez now, and that seems money well worth spending on a player who could be an ideal long-term replacement for an over-the-hill Benzema at centre-forward.

Mauro Icardi would make a fine signing for Real Madrid

Hazard and Icardi seem like they could form a stunning partnership at the Bernabeu, and both could be players keen to move on to bigger things, with Chelsea not even playing in the Champions League this season, while Inter are back in the competition after a long absence and are surely not among the contenders to win it.

Both could be up there with the very best in the world were they able to play with other star names at big clubs competing for the most prestigious honours, and Hazard also has the advantage of being out of contract at Stamford Bridge at the end of next season.

Don Balon claim Real would try offering €150m for the former Lille star, which could end up being a bargain as CFC may have little choice but to cash in on him for a reduced fee soon if he does not extend his contract in west London.