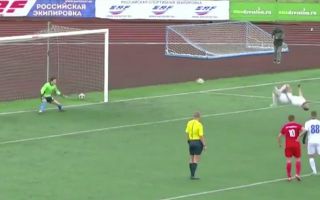 Rubin Kazan youth team player Norik Avdalyan has made a name for himself with this ridiculous penalty during a game on Sunday.

It happened during an encounter in Russia’s National Student League on Sunday, and unsurprisingly it has gone viral since.

It’s going to split opinion as on one hand it’s an audacious bit of skill to pull it off. On the other, it’s pretty unnecessary and a little silly, albeit if it was at a higher level and was in an important game, he definitely wouldn’t be trying it.

With that in mind, we have to give him credit for this ridiculous back-flip penalty which we probably won’t see the world’s biggest names try in a game anytime soon…