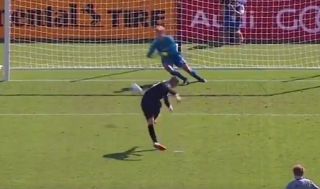 Wayne Rooney has made it nine goals in sixteen appearances for his new club DC United after another fine performance in the MLS.

The former Manchester United and Everton star no longer looked at his best in the Premier League in the last few seasons, but is showing glimpses of his best form again since his move to the USA.

MORE: These Man United fans jealous of Arsenal for this reason as Gunners continue storming run under Unai Emery

Rooney was on hand to poach a goal from close range and then dispatch a penalty for United in a 2-1 win over the Chicago Fire.

If the 32-year-old carries on like this he might well have offers to return to the English top flight in the near future!