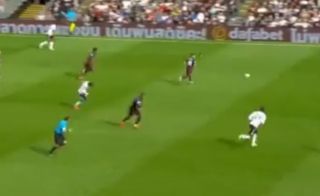 Arsenal reporter Chris Wheatley has tweeted a brilliant Lucas Torreira video from the Gunners’ 5-1 win over Fulham at the weekend.

The Uruguay international has made a fine start to his Emirates Stadium career, and showed his feisty, competitive nature in this clip below.

Torreira does brilliantly to win the ball back and start a move for Arsenal, with many fans now comparing the young South American with Chelsea star N’Golo Kante.

Here’s the Torreira video, and if you listen carefully you can hear how much the travelling fans appreciated it as they started singing his name just afterwards…

Love this from the Arsenal away fans yesterday. Lucas Torreira wins back possession and the Uruguayan's own chant begins to break out.

'He comes from Uruguay, he's only 5ft high' pic.twitter.com/nEx74B1Gyx

Comparisons with Kante are very kind, however, given that Torreira would do well to achieve even half of what the Frenchman has in his time in England.

A shock Premier League winner with Leicester City in 2015/16, Kante also won it the following year with Chelsea, when his immense form also saw him named PFA Player of the Year.

Since then, he’s added the FA Cup and World Cup to his trophy cabinet, but these Gooners think Torreira is showing similar potential…

So far this season, Torreira is making 3.1 tackles & interceptions per game, whilst Kanté is making 2.6.

Our summer signing is proving he’s worthy of the comparisons. pic.twitter.com/8DI2JN0FE5

Dare I say it, he's better than Kante offensively and he's different too. Kante is a ball winner and gives it to others Torreira wins the ball and dictates the tempo of the game. Handy at set pieces too.

Torreira Vs Fulham. Kante should be jealous. https://t.co/dsXpHSbvra

Lucas Torreira v N'Golo Kanté last 3 games (the PL games Torreira has started). We've needed this type of player for so long. I love everything about him. pic.twitter.com/yi88EpPH7V

Lucas Torreira has been so impressive to me, can shield the back four, very good at cutting passing lanes, is very good at resisting the press, can tackle well. Everything points out to a new Kanté

Can we talk about torreira? Dude is special, apart from Kante, can you show me a better DM in d epl? I will wait.