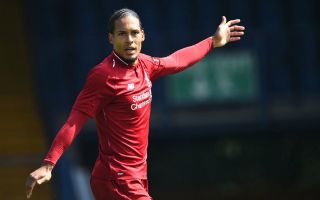 Liverpool defender Virgil van Dijk has had plenty of praise for his influence on the Reds backline, but Ronald Koeman believes that he can still improve.

After joining from Southampton in January, the 27-year-old has made a crucial difference to Liverpool with his defensive solidity and marshalling of the defence.

Along with other key individuals including summer signing Alisson, it has resulted in a better defensive record and balance in the side so far this season, as the Merseyside giants have conceded just three goals in their opening eight Premier League games.

There have been issues along the way in terms of individual mistakes, and citing his rash tackle against Man City at the weekend which led to a penalty being awarded, albeit missed by Riyad Mahrez, Koeman has stated where he believes his defensive leader can still improve.

“I know him so well – and that means I know where all his little faults are,” he is quoted as saying by The Mirror. “Virgil has to improve. Not a lot. But sometimes he is a little too laid back. That needs to change.

“It will not affect his chances with me. He is still my main man, but I want him to get better.”

It seems like constructive criticism if anything, and Van Dijk will undoubtedly look to take it on board and improve to ensure that he remains a key figure for club and country moving forward.

Nevertheless, the Liverpool fans below have urged Koeman to rest their star man if he isn’t happy with him, as clearly they want him back at full fitness when he returns for duty at Melwood after the international break.

It’s likely that Van Dijk features prominently against Germany and Belgium, but it seems as though Koeman’s advice hasn’t gone down too well with everyone…

Tell you what don’t pick him for the Netherlands then .?

Feel free not to pick him ron

Bench him. We won’t mind.

Pack your bags and come home Virgil and bring Gini with you, we need you more YNWA

Don’t play him Ron. Thats cool with me

I say bench him for both games.