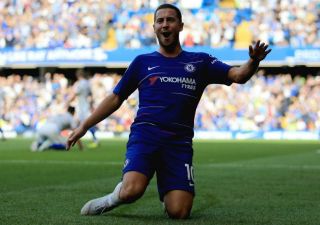 Eden Hazard raised concerns for Chelsea this week after conceding that a move to Real Madrid remains a dream for him.

As per BBC Sport, the 27-year-old offered an honest answer when discussing his future, and he made no secret of his desire to eventually play for the Spanish giants.

Hazard is enjoying an excellent start to the campaign under Maurizio Sarri, scoring eight goals and providing three assists in just 10 appearances, and it appears as though the Italian tactician could be helping him take his game to the next level.

Despite that though, he did little to silence talk over his future as he conceded that he still dreams of a move to the Bernabeu, and so time will tell if that move materialises.

As noted below, Morata has now responded to those comments and believes that while Hazard isn’t going to push for an exit from Chelsea to get his move to Real Madrid, if he does want the switch then it’s unlikely that the Blues will stand in his way and make it difficult if the right offer is presented.

“If he has said it that clearly [that he wants to play for Madrid] then that’s the way it is,” he said, according to AS. “We’ve said that it’s not that he wants to leave Chelsea but if Madrid come in for him, that won’t be an obstacle.

“The thing is that he has a very good relationship with the club, he’s happy there and it’s not like other cases when a player wants to leave a club at any cost, but if it’s good for Chelsea they will keep that in mind.”

Much will depend on the offer and the club not wanting to hold the player against his will. With that in mind, time will tell whether or not Hazard seals an exit from Chelsea next year as the full focus for now will be on continuing to lead Sarri’s side towards success this season.

Given Madrid’s recent form though, it would come as no surprise if they look to Hazard to provide them with a major boost and to land a marquee signing to finally fill the void left behind by Cristiano Ronaldo after his exit this past summer.