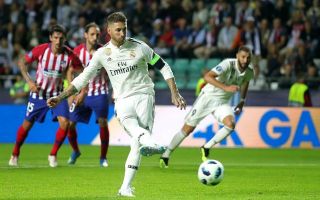 Real Madrid president Florentino Perez is reportedly on the lookout for a long-term successor to the ageing Sergio Ramos.

And according to Spanish outlet Don Balon, he’s identified Ajax starlet Matthijs de Ligt as the man for the job after his impressive form in the Eredivisie and for the Netherlands at international level.

De Ligt has long been regarded as one of the most promising young defenders in the European game and Don Balon suggest Perez would is prepared to offer as much as €60million to prise him away from Ajax.

The 19-year-old could be a Madrid legend for years to come if he fulfils his potential, much in the same way Ramos has been after joining the club from Sevilla at a young age.

The Spaniard cannot go on forever, however, so it’s wise for Los Blancos to start thinking ahead about how to bring in the next linchpin of their back line.

It would no doubt be a high-pressure move for a player so young to move to a big club like Real, but De Ligt has shown in his short career so far that he’s no ordinary youngster.