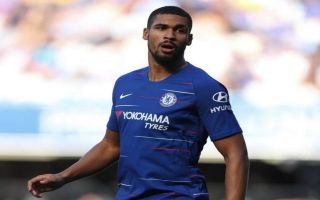 Chelsea manager Maurizio Sarri has suggested that Ruben Loftus-Cheek needs to improve the ‘tactical’ side of his game in order to break into the first team.

The 22-year-old starlet has just three senior appearances under his belt this season, most recently playing 70 minutes against MOL Vidi last Thursday in the Europa League.

The midfielder has missed a few games through injury and was included in Gareth Southgate’s England squad for games against Spain and Switzerland back in September, but his lack of playing time since has seen him omitted from the latest round of international fixtures.

Loftus-Cheek had the best year of career so far in the 2017-18 campaign, while on loan at Crystal Palace, where he became a fixture in Roy Hodgson’s starting XI to help the Eagles avoid relegation, ultimately earning himself a place in England’s World Cup squad.

The youngster played his part as the Three Lions reached the semifinals of the competition, but he has been sent tumbling back down to earth since his return to Stamford Bridge this summer.

New Blues boss Sarri admits that while he admires Loftus-Cheek’s many qualities on the pitch, he still has to work on one key area of his game in order to establish himself as a starter.

After the international break, Chelsea are scheduled to face off against Manchester United at the Bridge, which is a huge game for both sides.

The Blues are joint top and chasing the title while United are languishing in midtable, 7 points off the pace. Loftus-Cheek may harbour hopes of featuring in that heavyweight clash, so in the meantime, he must keep working hard in training to force his way into Sarri’s thinking.