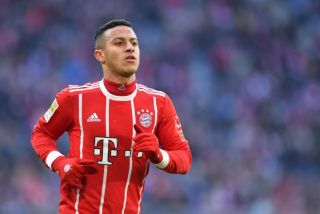 Bayern Munich midfielder Thiago Alcantara admits that he swapped the Camp Nou for the Allianz Arena to ‘find the joy in football again’.

The Spaniard left Barcelona in 2013 to join the German giants, after coming through the ranks with the Catalan club at youth level and spending four seasons with the senior team.

The 27-year-old won the Champions League and four La Liga titles during his time with the Blaugrana, but he never fully established himself in the starting XI with the likes of Andres Iniesta, Xavi and Sergio Busquets all ahead of him in the pecking order at the club.

Things have been different for Thiago with Bayern, who have used him as the creative hub of their first team in the middle of the park over the last five years.

The Spain international has made 158 appearances for the German champions, scoring 25 goals and has helped the club win five consecutive Bundesliga titles.

Looking back on his decision to leave Barca, Thiago has revealed the main reason he had to move on, as he told SER on Wednesday: “I have always wanted to play and since that wasn’t possible with Barça I had to leave to find the joy in playing football again.

“To me playing is more important than winning a trophy, in the end, you always ask yourself ‘To what extent I have contributed to the win?’.”

The diminutive playmaker is currently away on international duty with La Rojas ahead of matches against Wales and England over the next seven days.

Following those fixtures, he will return to club duty with Bayern, ahead of a crucial league encounter against Wolfsburg.

The Bavarian’s have failed to win any of their last four games in all competitions and supporters will hope that Thiago can rediscover his best form to drive the team back up towards top spot in the Bundesliga standings.