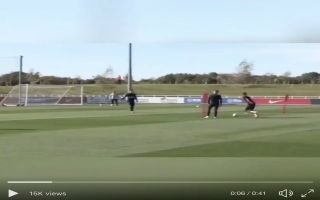 Manchester United striker Marcus Rashford has been preparing for Friday’s clash against Croatia by scoring for fun in training.

The Three Lions will take on the 2018 World Cup finalists this Friday in the UEFA Nations League, in a rematch of the semi-final clash in Russia back in July.

Rashford has been included in Gareth Southgate’s latest squad despite finding regular playing time at Old Trafford hard to come by this season and he looks ready to make his mark on the international stage.

SEE ALSO: Man United star pulls out of international duty with mystery injury, not certain to make it back vs Chelsea

The 20-year-old showed off his superb finishing ability in an England training session on Wednesday, smashing the ball home time and time again after using his skills to beat the defender in front of him.

The young attacker is looking very sharp and will be hoping to add to the five goals he has scored for his country since making his debut back in 2016.

Man United fans will be hoping he can reproduce this kind of magic when he returns to club duty next week!