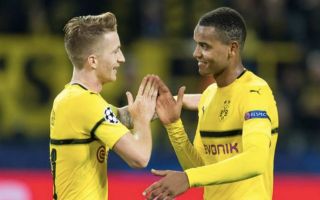 Borrusia Dortmund defender Manuel Akanji has revealed his ambition to play for Manchester United in the future, having been a fan of the club as a boy.

The 23-year-old moved to Germany from FC Basel in the Swiss Super League back in January and has quickly emerged as a fixture in manager Lucien Favre’s starting XI.

The Dortmund centre-back is also a regular in Switzerland’s squad at international level and he played a prominent role in their run to the last-16 of the World Cup in Russia this summer.

The Red Devils defensive woes have been well documented in the opening months of the 2018-19 campaign, as head coach Jose Mourinho has watched his side slip to a mid-table position after eight games, seven points behind their rivals at the top of the table.

According to Bluewin, Akanji has admitted he would love to play for United one day, as he told reporters on Thursday: “Many know that Manchester United has been my favourite club since childhood.

“It would be nice to play there once. But that’s not an issue right now. I am very satisfied in Dortmund, I want to win BVB titles and compete with the Swiss national team in many more big tournaments.”

Dortmund are top of the Bundesliga after seven matches this term, with five wins and two draws to their name and four points ahead of defending champions Bayern Munich.

Akanji has been a major part of their recent success and with the best years of his career still to come, the German outfit may be reluctant to lose him when the transfer window re-opens.

However, the Swiss starlet might have piqued United’s interest with his latest comments and the club certainly has the financial muscle to force through a deal in January or next summer, particularly if results on the pitch don’t improve drastically in the coming months.