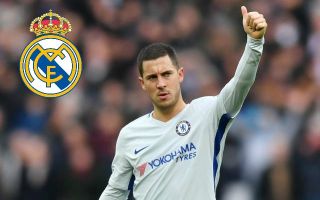 Ex-Barcelona midfielder Rivaldo believes Chelsea winger Eden Hazard could get ‘even better’ if he swaps Stamford Bridge for the Santiago Bernabeu.

The Belgian star has been on fire at the start of the 2018-19 campaign, scoring seven goals in his first eight Premier League appearances to help the Blues storm to the top of the table.

The 27-year-old seems to be producing the best football of his career under Italian boss Maurizio Sarri and looks almost unstoppable whenever he picks up the ball in the final third of the pitch.

According to Metro Sport, Hazard has been heavily linked with a move to Madrid in recent times and he added fuel to the fire on Thursday by admitting publicly that it is his dream to one day play for the club.

As Metro Sport reports, in the wake of his comments, former Brazil international Rivaldo has urged the Chelsea talisman to force through a transfer to Los Blancos, as he told reporters: “The Belgian attacker is a great player and could be a very good option for his ‘dream club’ Real Madrid in the next transfer window.

“Real Madrid should be considering his signing, especially given their recent poor form and Hazard’s stated desire to play at the Bernabeu.

“Hazard is very talented, scores goals and assists a lot, he’s a spectacular player who I particularly appreciate.”

The La Liga legend went on to suggest that Hazard could improve his overall game with a move to Spain, given the fact he would probably be given more freedom to influence matches by opposition defenders.

“In my opinion, Hazard could play even better at Real Madrid than in England as Spanish football gives a little more freedom to the players,” Rivaldo continued.

“So if he is already producing masterpieces in the Premier League, he could get even better in Spain.”

Hazard insisted he will not be considering a switch to Madrid in January, but he is now odds-on to leave Chelsea next summer, as per Metro Sport.

Blues supporters might feel betrayed by this latest development but Los Blancos fans will no doubt be excited by the prospect of the Belgian’s arrival in the near future, particularly given their team’s poor start to the new season.