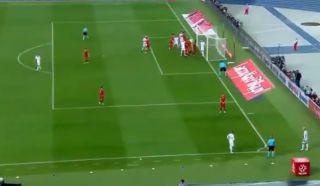 Chelsea may be interested to know that Krzysztof Piatek has scored yet again this season to continue his incredible form.

After 13 goals in his first 9 appearances for Genoa, whom he joined in the summer, Piatek has now scored his first goal for national team Poland.

It’s just the 23-year-old’s second cap for the European giants, but he showed what a lethal force he is in front of goal by heading in the opener against Portugal.

CaughtOffside understands Chelsea are leading the chase for Piatek’s signature at the moment after being wowed by his form and with Maurizio Sarri’s side clearly in need of more quality up front due to the poor form of Alvaro Morata and Olivier Giroud.

This goal will no doubt have Blues fans excited as they’ll hope their club can get a deal done in January.

Though it surely won’t be long before other big sides try to snap up the exciting attacker as well, with Don Balon also linking him with Real Madrid.

Breakthrough star of the season! ? pic.twitter.com/cT7gwE2Cvp