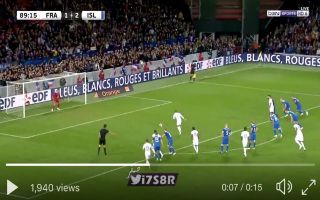 The away side raced into a 2-goal lead at the Stade de Roudourou on Thursday night and looked set to record a huge upset against the world champions before the hosts fought back in the last ten minutes.

An own goal from Eyjolfsson in the 86th minute gave Les Bleus hope before Iceland gave away a penalty in the dying seconds of the game as a result of handling the ball in the area, which Mbappe stepped up to convert.

SEE ALSO: Video: Hugo Lloris puts Tottenham woes behind him with amazing triple save for France

It was the perfect penalty from the teenage sensation, as he smashed the ball into the top left-hand corner of the net with the goalkeeper diving in the opposite direction.

Check out the goal below via Twitter, which was Mbappe’s 10th for France in 25 appearances.