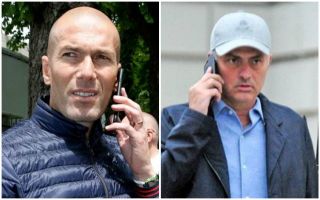 Zinedine Zidane is reportedly the number one choice to replace Jose Mourinho at Manchester United as he’s set to learn his fate.

According to the Daily Express, United executive vice-chairman is tempted by the possibility of hiring Zidane, who has been available since leaving Real Madrid in the summer.

The French tactician was a big success at the Bernabeu and his shadow has been looming over Mourinho for much of this season.

The Red Devils have been poor under the Portuguese in recent times and few would argue a change in management looks necessary to solve both results, the style of play, and the overall mood of the squad.

The Express report of Mourinho and Woodward holding crunch talks today, though we are yet to hear any outcome of this meeting.

It is claimed in the report that Mourinho is eager for backing in the transfer market as he continues to chase defensive signings.

But a similar recent report from the Sun also stated Mourinho was worried that United had already sounded out Zidane about replacing him, so we may yet have some big updates on the situation soon.