Manchester City midfielder Oleksandr Zinchenko may be offloaded to Napoli in Serie A when the transfer window re-opens, according to his agent.

The 21-year-old has found playing time hard to come by during his two-year spell with the Citizens, featuring just 16 times for the senior team in total.

He was sent out on loan to PSV during his first season at the club before manager Pep Guardiola called him back for the 2017-18 campaign, during which he picked up a Premier League winners medal.

Zinchenko has often had to fill in at left-back for the team on the rare occasions when he has been called upon, but he still managed to impress, showing his versatility and commitment to the cause.

However, the Ukranian starlet has featured just twice for Guardiola’s men this season and his agent has suggested that a January switch to Napoli could be on the cards.

“We are always open to proposals coming from Italy,” Alan Prudnikov told reporters on Friday, as per the Manchester Evening News.

“Napoli showed interest both over the summer and the year before, but never managed to find an agreement with Manchester City.

“I met with [Napoli director Cristiano] Giuntoli and we laid down the foundations of a deal with Zinchenko, but the two clubs could not agree on a fee.

“We’d be ready to discuss it again, though.”

Zinchenko’s Man City career seems unlikely to take off if he does decide to remain at the Etihad beyond the next transfer window, with a whole host of names ahead of him in the pecking order at the moment. 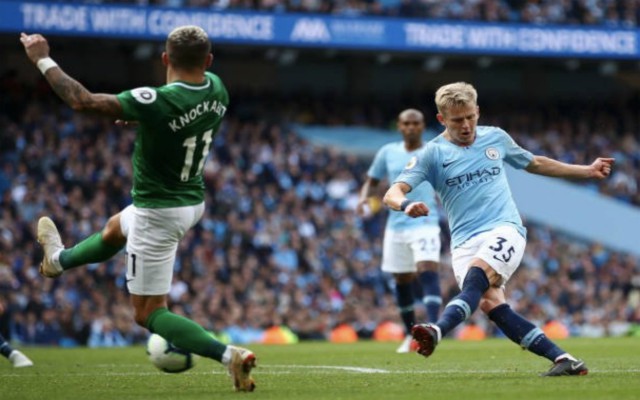 City’s midfield is full of world-class players such as Kevin De-Bruyne, Bernardo Silva, David Silva and Ilkay Gundogan, meaning the youngster would have to keep playing as a full-back, which is not his preferred position or indeed where he naturally thrives at his best.

Unfortunately for City fans, it seems as though Zinchenko will be moving onto pastures new in the near future and their loss could be Napoli’s gain if he is given more playing time for the Italian outfit.