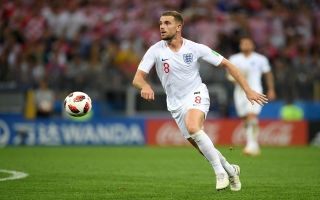 According to the Mirror Football, Henderson was heard telling Dalic to ‘Are you the f****** ref’ after a decision went against him during the tie.

This evening’s encounter between England and Croatia perfectly echoed the atmosphere within the empty stadium, the match ended in a goalless draw with neither side managing to spark some life into the game.

See More: These Liverpool fans loved what Dejan Lovren did in Croatia clash with England

The game was played behind-closed-doors because Croatia were seeing out a UEFA sanction after a pattern liking a swastika was marked on the pitch prior to a Euro 2016 qualifier against Italy.

Given that there was no fans in attendance, everything the players said on the pitch could be heard live on Sky Sports.

Henderson reacted angrily to Dalic’s appeal for a handball on him and shouted towards the Croatian boss ‘Are you the f****** ref’.

Viewers were left stunned this evening scratching their heads at how the match could be played with no fans in attendance and it seems that the players on both team also couldn’t get their heads around the bizarre situation which led to a particularly dull contest.