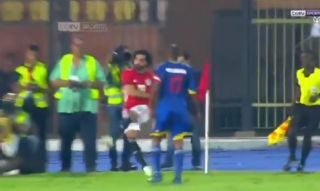 Liverpool winger Mohamed Salah produced a moment of magic for Egypt on Friday against Swaziland in an African Cup Of Nations qualifier.

The Reds talisman has endured a frustrating start to the season at club level, having scored just three goals in the team’s opening eight Premier League matches.

There has been some suggestion that the 26-year-old will fail to match his 44-goal exploits last year for Jurgen Klopp’s men, however, he has put his name back in the spotlight with an unbelievable goal for his country.

SEE ALSO: Klopp insists he doesn’t want to go down in history for the wrong reasons at Liverpool

Salah scored the fourth goal for Egypt just before half-time, swinging in a corner from the right-hand-side which flew into the net, much to the delight of the home fans.

The sensational strike has been getting a lot of attention on Twitter, with many Liverpool fans hoping the goal can be a catalyst for him to turn his fortunes around in front of goal for the remainder of the year.

Check out the goal below, along with a few tweets from supporters:

Mohamed Salah has just scored directly from a corner kick, unbelievable scenes! The King of Egypt is back amongst the goals ???

And that beautiful smile

Mo Salah has the ability to change my mood 180degree!
The goal is just perfect! ??

Salah struggling with finishing and then scoring an Olympic goal is the most Salah thing ever.

Salah is back and will score 25-30 goals this season.

This time last year it was the last min World Cup qualifying goal that set Salah on fire for the rest of the season. What does he do tonight? Score a goal straight from a corner ???