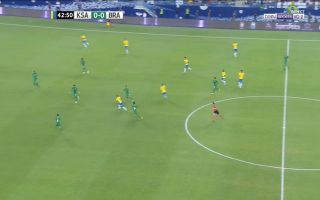 Manchester City frontman Gabriel Jesus opened the scoring for Brazil against Saudi Arabia this evening. The 21-year-old has found goals hard to come by this season.

Jesus has been limited to cameo appearances off the bench for Pep Guardiola’s men this season.

Although the attacker proved tonight that he has the killer instinct to be the heir to Sergio Aguero’s throne at City.

Brazil broke the deadlock in the 43rd minute when Neymar split the Saudi Arabia defence with a lovely pass to Jesus who slotted the ball past the keeper.

Neymar proved to fans that he has the vision and passing ability to create chances for his teammates with his wonderful assist.

See More: 21-year-old Manchester City star could be in line for a January switch to Napoli

Check out Jesus’ goal below:

Brazil’s goal couldn’t have come at a better time, Brazil struggled to capitalise on their chances and Jesus’ strike in the 43rd minute made sure they went into the second half on top.

Jesus has only managed to score a single goal so far for City in the Premier League and a goal whilst away with Brazil will do wonders for the youngster’s confidence.