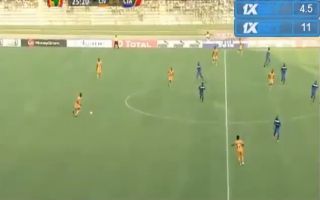 Manchester United’s out of form star Eric Bailly scored and assisted for the Ivory Coast today when they faced off against the Central African Republic.

Bailly has been in abysmal form lately for United with the 24-year-old limited to only three starts this season.

United have fell to shock defeats against Brighton, Tottenham and most recently West Ham which have derailed United’s chances of lifting the Premier League trophy this season.

Bailly was also able to notch himself an assist earlier in the game.

While Bailly’s goal may steal the headlines in the 25th minute Ivory Coast’s no.9 launched a lovely pass from inside his own half which soared over the top of the defence and into the path of Aston Villa’s Jonathan Kodjia.

United fans will hope Bailly brings his ball-playing exploits back to Manchester after the international break.

Check out Bailly’s great assist to Kodjia below:

Bailly has so far failed to live up to expectations at United. United signed the Ivorian for a fee reported to be £30m according to BBC Sport, the centre-back joined from Valencia back in June of 2016.

United fans will be hoping that a masterful performance from Bailly while away with the Ivory Coast will have the centre-back return to United full of confidence after the international break.

United will need all hands on deck if they are to to turn around a disastrous start to the new Premier League season.