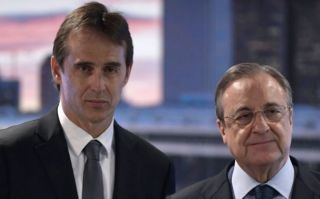 Things haven’t started particularly well for Julen Lopetegui at Real Madrid, but reinforcements are reportedly being considered to address his defence.

Given that they’ve only scored 12 goals in their opening eight La Liga games this season, it could be argued that their attack is what should be the priority for the reigning European champions.

Particularly after the loss of Cristiano Ronaldo this past summer with no marquee replacement arriving, coupled with injuries suffered by Gareth Bale and Isco, it has led to struggles in the final third for the Spanish giants.

However, despite only conceding seven goals in those eight games, it’s claimed by Marca that a centre-half could be the priority for Real Madrid.

In fairness, given the lack of elite depth behind the likes of Sergio Ramos and Raphael Varane, that is an issue which will become more prominent with the former edging closer to the latter stages of his career.

With that in mind, it’s understandable as to why Real Madrid would be looking at that area of the current squad, but time will tell who arrives as a potential solution.

It’s added by Marca that there are two starlets possibly on the club’s radar, with Leo Santos from Corinthians and Espanyol’s Mario Hermoso both specifically named in the report.

Nevertheless, it’s debatable as to whether either really address the problem, as it would still be a gamble as to whether or not they would develop into world-class individuals to offer Real Madrid what they need to compete on multiple fronts year in and year out.