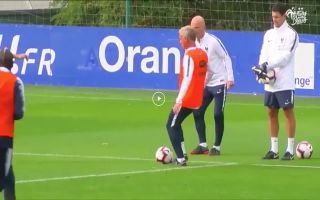 France boss Didier Deschamps dusted off his old boots and got involved in a France training match today, the 49-year-old showed that he still has it by humiliating some French stars.

Deschamps did what most defenders have struggled with in the past 18 months by tackling Kylian Mbappe, Deschamps also scooped the ball over Lucas Hernandez as well as creating goals during his time training with the team today.

See More: Video: Man Utd’s Paul Pogba loses it as brawl breaks out in France vs Iceland after cynical challenge on Kylian Mbappe

Check out the video of Deschamps in action below:

It’s no wonder that France are dominating on the international stage right now with Deschamps at the helm.

Deschamps made history when he lifted the World Cup with Le Bleus during the summer, becoming one of only three men to win the World Cup as a player and manager.