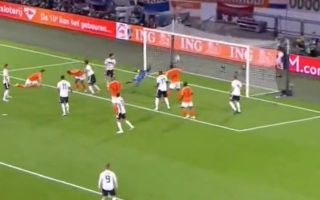 Virgil van Dijk is known for being a defensive rock for Liverpool and the Netherlands, but he was also effective at the other end of the pitch against Germany on Saturday night.

The two sides faced off in their UEFA Nations League encounter, and it took until the half-hour mark for a breakthrough.

After the initial headed attempt cannoned off the crossbar, Van Dijk was on hand to head home into an empty net for the opening goal of the game to spark celebrations amongst the home faithful.

It’s only Van Dijk’s second international goal but he’ll be delighted to have made a decisive impact at the attacking end too as he continues his impressive form for club and country so far this season.

Jurgen Klopp though will undoubtedly be hoping that his defensive rock returns to Melwood next week with no injury problems, with Mohamed Salah scoring for Egypt on Friday before picking up a problem to give the Liverpool boss an unwanted headache.

Van Dijk puts the Netherlands ahead against Germany pic.twitter.com/SENOuWvgHA

Virgil Van Dijk heads the Dutch in front at the Amsterdam ArenA!