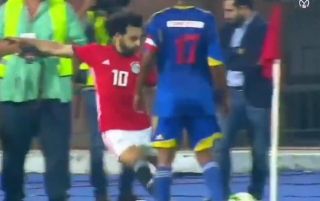 Mohamed Salah scored a stunning goal direct from a corner for Egypt – which is a pretty impressive way to announce the end of a mini goal drought.

It’s not been the best start to the season for the Liverpool front-man, who has set himself stupidly high standards after a debut campaign of 44 goals in all competitions that won him both the Golden Boot and PFA Player of the Year.

Luckily, it seems Salah has a new plan for finding the back of the net, and that’s by bypassing everyone else in the box on a corner routine and simply curling it in himself.

Here’s video proof that this strike was no fluke, with the Reds star seen practising this technique before the game…

??@MoSalah's Olimpico goal last night was no fluke… Here he is practising from the corner flag the night before. #practisemakesperfect

Liverpool fans will hope to see one or two of these at Anfield before too long.