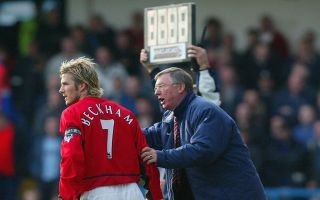 A shocking changing room incident at Manchester United in 2003 between Sir Alex Ferguson and David Beckham led to the star leaving for Real Madrid. This is according to a report published by The Mirror earlier today.

Beckham was one of United’s standout players at the time and with that tag came heavy speculation that Real Madrid were courting the midfielder as their next ‘galactico’ signing.

After an FA Cup defeat in February Ferguson decided to question Beckham’s performance level since the transfer speculation.

The heated argument was followed by a freak accident which ultimately saw the Class of 92 graduate leave the club and join Los Blancos in their journey to become recognised as the most popular club in the entire world.

See More: Jose Mourinho out of ideas as he aims to solve Manchester United crisis with extremely risky double transfer

In his autobiography Ferguson wrote:

“In his final season with us, we were aware that David’s work rate was dropping and we had heard rumours of a flirtation between Real Madrid and David’s camp.

“The main issue was that his application level had dropped from its traditionally stratospheric level.

“He was around 12 feet from me. Between us on the floor lay a row of boots. David swore. I moved towards him, and as I approached I kicked a boot.

“It hit him right above the eye. Of course he rose to have a go at me and the players stopped him. ‘Sit down,’ I said. ‘You’ve let your team down. You can argue as much as you like.’

“The next day the story was in the press. In public an Alice band highlighted the damage inflicted by the boot. It was in those days that I told the board David had to go.

After reading this extract from Ferguson’s autobiography I could only liken the relationship between Ferguson and Beckham at this point to the relationship we are seeing unfold between Jose Mourinho and Paul Pogba right now.

In the past month fans and pundits alike have seen the sour relationship played out throughout the media with both men taking every opportunity to tarnish the reputation of the other.

Another extract from Ferguson’s autobiography presents a solution to the ongoing issue at Old Trafford:

“My message would have been familiar to board members who knew me. The minute a Manchester United player thought he was bigger than the manager, he had to go.

“I used to say, ‘The moment the manager loses his authority, you don’t have a club. The players will be running it, and then you’re in trouble.'”

Paul Pogba has shown on numerous occasions through his eccentric actions that he believes he is not only bigger than the manager but in fact the club as a whole.

United’s only chance of preventing a full revolt in the dressing room is to show either man the exit door at Old Trafford.