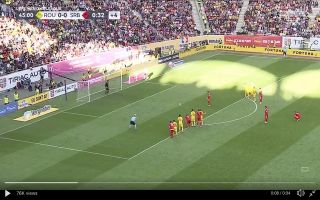 Tadic had the chance to put Serbia into the lead during the first-half stoppage time. Tadic echoed Mahrez’z miss against Liverpool last week by sending the ball far and wide of the goal.

Tadic’s attempt to trick the Romania goalkeeper with his unorthodox stutter step run-up certainly didn’t do him any favours today.

Check out the shocking penalty below:

Former Southampton man Dusan Tadic has skied a spot kick for Serbia in their UEFA Nations League clash with Romania!

Worst penalty of the season?

Here’s a look at Mahrez’s penalty miss from last week:

It is hard to pick between the two truly shocking penalties by the attacking stars.