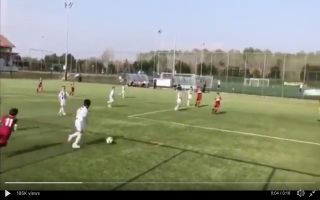 Cristiano Ronaldo took some time away from his off-the-pitch legal battle in regards to a rape allegation to share a video of his son Cristiano Jr scoring twice for Juventus’ youth team.

As noted by BBC Sport, the Juventus star has denied allegations made against him by Kathryn Mayorga regarding what happened between them at a Las Vegas hotel in 2009.

In the first clip Jr is seen cutting in from the right hand side using some fantastic skill before rounding the helpless goalkeeper and poking the ball into the empty net.

In the second clip Jr again cuts in from the right hand side this time firing a low shot past the keeper into the bottom corner.

See More: Ranking the top 5 candidates to be next Man United manager if they could sign 3 best players from last job

Check out both of Cristiano Jr’s goals below:

“[Cristiano Jnr] is very competitive, he’s like me when I was young.

“I like to teach him some stuff, but he’s going to be whatever he wants and I’m always going to support him.

“But of course I want Cristiano to be a football player, because I think he has that drive. He has a good body, he’s fast, he has skills, he shoots good.”

Cristiano Jr certainly looks as though he will go on to have a career in the professional game, whether he can reach the heights of his father, we can’t say for sure just yet.