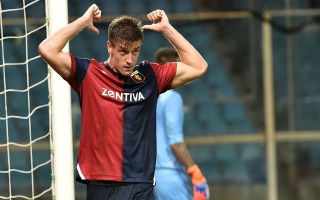 His form so far this season has led to a string of top European clubs being linked with a move, but Barcelona could reportedly be among those to miss out on Krzysztof Piatek.

The 23-year-old has caused quite the stir since his summer move to Italy, scoring 13 goals in just eight games for Genoa so far this season.

With obvious comparisons with compatriot Robert Lewandowski given the similarities in their playing style and influence in front of goal, Piatek could certainly be starting out a path to becoming one of Europe’s top strikers.

As noted by Calciomercato, it has been claimed that Barcelona, Chelsea and Juventus are among those pursuing him, while it’s also been suggested that he has a €60m price-tag due to his early-season form.

However, they could all be set to miss out as Sportmediaset claim that Roma sporting director Monchi has made a major breakthrough with Piatek’s agent while he is in discussions with Genoa over a potential transfer.

It remains to be seen if that’s enough to put the Giallorossi at the front of the queue, while it’s worth noting that they already have Edin Dzeko in that role, and so Piatek himself may want to consider whether or not he’d get enough playing time at the Stadio Olimpico.

Further, a concern for the interested clubs touted above to consider too is that while the Polish international has enjoyed a fine start to the campaign without doubt, he has yet to prove that he can deliver consistently at the highest level over the course of an entire campaign.

With that in mind, it will surely be wise for the likes of Barcelona, Chelsea, Juventus and Roma to assess him over a longer period first before looking to snap him up.

Nevertheless, as noted by The Guardian, Barcelona and Roma clashed this past summer over Malcom. Perhaps beating the Catalan giants to Piatek could be an important consolation for the capital club…