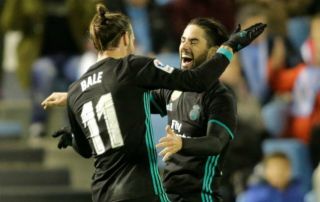 Real Madrid winger Gareth Bale is looking set to leave the club between now and next season, according to the latest transfer news from Spain.

The Wales international has failed to make the most of the opportunity to replace Cristiano Ronaldo as the main man at the Bernabeu this season as the team struggles under new manager Julen Lopetegui.

According to Don Balon, Bale’s future now looks to lie away from Real, with Manchester United, Chelsea and Tottenham all making him offers to return to the Premier League.

Of those choices, it seems the 29-year-old would lean towards joining United, despite Don Balon also claiming the Red Devils don’t currently look ready to pay over-the-odds for him.

Still, there are complications with the other clubs as well as Don Balon claim that a swap deal with Chelsea involving Eden Hazard is not currently on the cards as Madrid would rather sign someone like Neymar for that role.

A swap deal involving Bale and Harry Kane at Tottenham is also talked up in the report, but it stresses that the player himself would rather join United, which makes sense given their history and prestige, as well as it representing a new challenge after already shining at Spurs earlier in his career.

MUFC fans will certainly hope the winger chooses them as he’d be the ideal pick to replace the off-form Alexis Sanchez in Jose Mourinho’s struggling squad.

Bale may not have hit his absolute peak form in his time in Spain, but he’s proven a lucky charm for them, helping the club win the Champions League four times since he joined and contributing three goals in those victories.