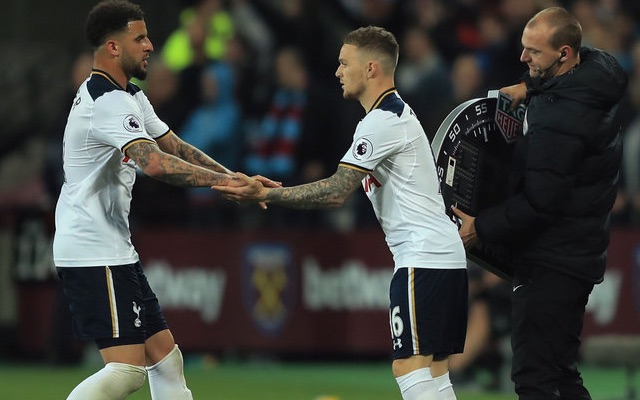 Manchester City defender Kyle Walker insists that he harbours no resentment towards Kieran Trippier, who started ahead of him at the World Cup.

The Spurs right-back was Gareth Southgate’s first choice ahead of Walker in Russia as the Three Lions stormed to the semifinals of the competition over the summer.

Trippier even scored in that particular match against Croatia, via a superb early free-kick before England were eventually knocked out after extra-time, which capped off a superb tournament for him on an individual level.

The two men fought for supremacy at club level for a time too, before Walker eventually swapped Tottenham for Man City back in 2017.

Despite the fact they remain in competition with each other at international level, the City full-back has shockingly admitted that his former teammate deserved to start ahead of him at the World Cup, as he told Sky Sports on Monday: “It was in the back of my mind [Trippier taking the position] but I knew in a weird way I didn’t have four bad games on the spin for England and [had not] got dropped.

“My place was kind of taken by default where I went to right centre-half, and Tripps had a fantastic World Cup.

“For me, he deserved to play the next two international games or however many games we played after that because he had a fantastic World Cup.”

Walker returned to right-back for Southgate’s men against Croatia last Friday, as part of a back-four which held the opposition to a 0-0 draw in the UEFA Nations League encounter and he is in line to start again when England play against Spain on Monday.

The 28-year-old defender has had a strong start to the season with City at club level, featuring in seven of their first eight Premier League matches and impressing once again with his dynamic approach down the right-hand side of the pitch.

Trippier has featured just as prominently for Tottenham, but he hasn’t quite managed to live up to expectations following his superb performances in Russia, as Mauricio Pochettino’s men have looked vulnerable at the back.

These two men will no doubt continue their fight for prominence with England, but supporters will just be grateful that Southgate has two top quality defenders to call upon for the foreseeable future, which highlights the depth of his current squad.