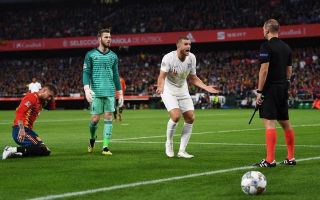 Tottenham ace Eric Dier found himself some surprising new admirers in the shape of Liverpool fans after he clattered Sergio Ramos in England’s win over Spain.

Dier put his stamp on the game in only the 12th minute with a needless challenge on Spain’s Sergio Ramos. Dier will wake up tomorrow to find he has gathered some new fans after his tackle on Ramos.

Many Liverpool fans have a strong hate towards Ramos after he injured Mohamed Salah early on in the Champions League final between Liverpool and Real Madrid last season.

See More: ‘Spain need goals and they bring on Morata’ – These fans react to Chelsea’s Alvaro Morata being substituted on for Spain in hilarious fashion

Dier was the unlikely bringer of some justice for Ramos’ actions towards Salah in the Champions League final. Dier was seemingly shown a yellow card for his efforts.

Check out the video of Dier’s tackle below:

Eric Dier vs Sergio Ramos with one of the most fabulously pointless clatterings ever seen. Magnificent. pic.twitter.com/hYfGBTmgdX

Check out Liverpool fans’ reaction to Dier’s challenge on Ramos:

Did Eric Dier just become King of Liverpool and Egypt with this tackle? https://t.co/su4hrOt6fx

Dier’s just been knighted in Liverpool

Massive Eric Dier fan, all of a sudden…. https://t.co/iUECq7nkqW

Eric Dier destroying Sergio Ramos has made my day. pic.twitter.com/ELVcd0wb5n

Tackle of the year from Eric Dier. pic.twitter.com/gorU272k4Q

Dier has certainly won himself a massive amount of fans tonight and the Tottenham man will likely receive a hero’s welcome when Spurs travel to Anfield later this season.