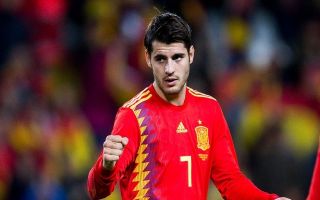 Some fans reacted in hilarious fashion to Chelsea striker Alvaro Morata being substituted on for Spain in their 3-2 defeat to England this evening.

Some fans couldn’t believe their eyes when Spain manager Luis Enrique decided to bring on misfiring frontman Alvaro Morata in a desperate attempt to claw back two goals against England.

Enrique’s plan to complete a comeback failed, the Spanish struggled to recover from their first-half defensive horror-show which saw England score three goals.

Morata has fallen out of favour with new Chelsea manager Maurizio Sarri, who has instead opted to choose Olivier Giroud as the man to lead the Chelsea frontline this season.

Morata joined Chelsea from Real Madrid last summer for a then club-record fee of £60m according to BBC Sport.

Morata has failed to impress during his time at Stamford Bridge and there seems to be no way back into the first team for the 25-year-old.

So you can understand some fans’ surprise at the attacker being chosen as the man to spur on a late rescue for Spain.

Check out tweets in response to Morata being brought on from these fans below:

Spain need goals and they bring on Morata ?

You want to score, so you brought on Ceballos and Morata. Lol.

Imagine Alvaro Morata coming on as a half time substitute for Spain and scoring a hattrick to rescue the match for the home side?
No, me neither.

When you're two goals down and Morata is what you have on the bench pic.twitter.com/P0OyvKpG99

It’s all good lads Morata is coming on

MORATA LOOOL Spain have thrown in the towel

Spain subbing Morata on when they need goals pic.twitter.com/fB3MJvUmDE

Morata being substituted on for Spain was clearly seen as a way of accepting defeat.