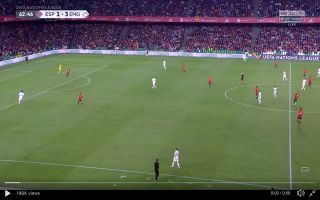 England and Everton goalkeeper Jordan Pickford had fans’ heart racing for a moment when the stopper made a comical error against Spain this evening.

In the 63rd minute of this evening Nations League encounter between England and Spain, Jordan Pickford shocked fans with his ambitious attempt to ‘Cruyff turn’ Spain’s Rodrigo.

Pickford lost the ball in his attempt to trick past the attacker but fortunately the England stopper was able to recover and make a last-ditch tackle to prevent Spain scoring into an empty net.

Check out a video of Pickford’s momentary lapse in concentration below:

What was Pickford thinking!? ?

He somehow doesn't give away a penalty after losing the ball in his own box! Correct call? ?

Pickford reminding me of the mate you have on Pro Clubs who thinks he’s Prime Ronaldinho pic.twitter.com/R5i7lx71hA

Pickford’s post-match reaction to the incident was just as hilarious:

Jordan Pickford explaining away Spain’s penalty appeal:
“It’s you look back there might have been a little nudge, but I got an elbow in me dish as well” ! Brilliant. ?? #ESPENG #ENGESP #Pickford pic.twitter.com/gzIurRhclk

Despite the former Sunderland man’s momentary lapse in concentration, the 24-year-old looked in fine form today. Pickford launched the counter attack’s that led to England’s first two goals against Spain. Pickford’s distribution was second to none tonight.

Also Pickford marshalled the defence expertly at times and when called upon pulled out some difficult saves to prevent Spain from coming away with anything from the match.