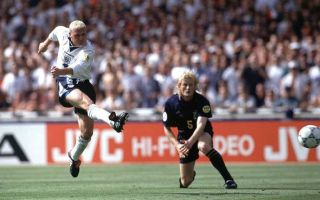 Former England midfielder Paul Gascoigne has taken to social media with a post reminding Scotland of his famous goal against them in Euro 96.

The Scots lost 3-1 against Portugal on Sunday at Hampden Park which marked the sixth defeat in eight games for Alex McCleish’s men, and an old tormentor has popped up to pour salt into the wounds.

Gascoigne scored a sublime volley for the Three Lions against Scotland at Wembley 22 years ago, during a 2-0 European Championships victory, after looping the ball over opposition defender Colin Hendry.

The spectacular strike is widely regarded as one of the best in England’s history and the ex-Rangers attacker felt that Monday was a great time to reflect on that moment, as the perfect response to his recent Scotland Football Hall of Fame snub.

Check out the brutal tweet trolling the Scottish FA below, along with some of the comments from people enjoying his humour:

Best reply to an embarrassing situation.

You’re a legend up here ?

You’re in the only hall of fame that matters in Scotland.