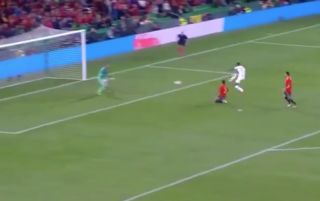 England produced a stunning double blow to Spain in their UEFA Nations League clash in Sevilla on Monday night.

Raheem Sterling had given the visitors the lead after 16 minutes, but it was all set to get even better for Gareth Southgate’s men before half-time.

As seen in the video below, Tottenham talisman Harry Kane did brilliantly to hold up play before producing a superb assist to carve through the Spain defence.

That set Rashford through in a one-on-one with Man Utd teammate David De Gea, and he made no mistake this time round after being wayward with his finishing against Croatia, as he kept his composure and produced an emphatic finish.

After disappointment in the reverse fixture last month, England will be delighted with their response in the opening 45 minutes in Seville…

Above all else remember “you don’t win anything with kids “ fine goal #Rashford pic.twitter.com/2QZWHPS6zs

.England are in dreamland! ?

They’re flying against Spain and here’s a look at the goal from Marcus Rashford that made it 0-2! ?